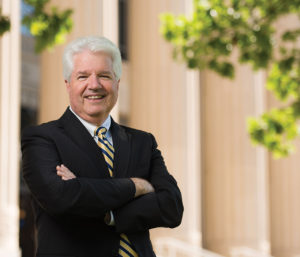 As we look forward to celebrating the University of Michigan’s bicentennial in 2017, I am very pleased to report that our remarkable institution continues to be financially healthy and well positioned for the future. In large part, this is due to the latest generation of our outstanding faculty and staff whose extraordinary dedication to the university enables it to thrive.

Our disciplined budget approach carefully balances the necessity to compete for exceptional students and talent against a challenging economic environment where financial efficiencies must be achieved. To that end, our 46,000 faculty and staff have long had a keen focus on the university’s core commitment to education, research and patient care while being exemplary stewards of the institution’s financial resources. 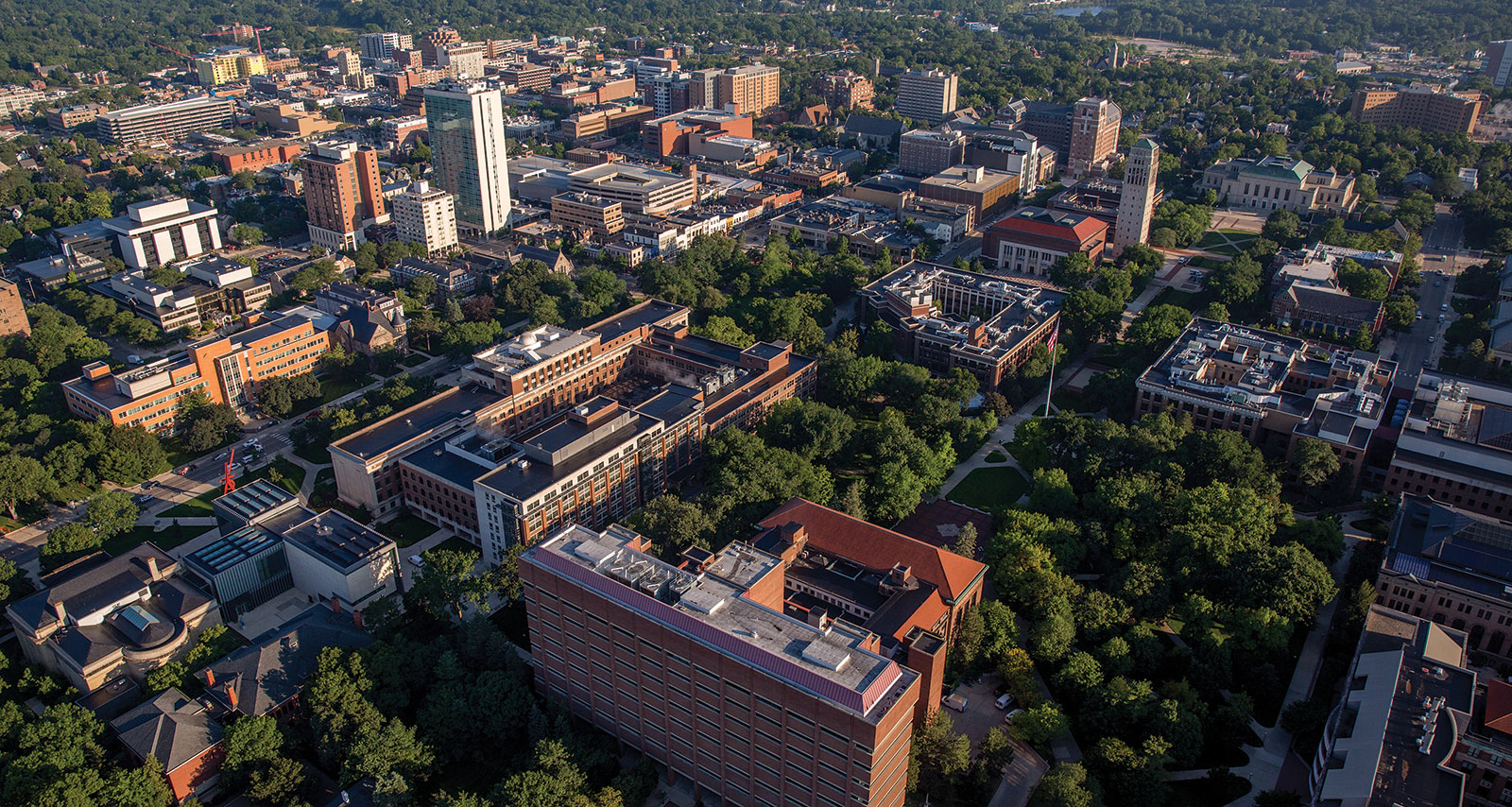 “As we look forward to celebrating the University of Michigan’s bicentennial in 2017, I am very pleased to report that our remarkable institution continues to be financially healthy and well positioned for the future.”

We expect net investment income to be volatile from year to year and use an endowment distribution policy together with our long term investment strategy to insulate the university from this volatility and provide dependable annual support for operations. The university’s endowment distribution policy smoothes the impact of volatile capital markets by providing for annual distributions of 4.5 percent of the moving average fair value of the endowment. This spending rule, along with the growth of the endowment, allowed for distributions to support operations of $296 million in FY 2016, for a total of $1.4 billion over the past five years.

The table below summarizes the university’s investment performance of the Long Term Portfolio in relation to relevant comparative benchmark portfolio returns.

Revenue diversification has long been an important strategy for the university to achieve financial stability. Over the years, this diversification has proven to be an important contributing factor in maintaining financial stability throughout varying economic cycles and avoiding unnecessary dependence on student tuition and fee increases. The components of the university’s sources of revenue are depicted in the following charts. 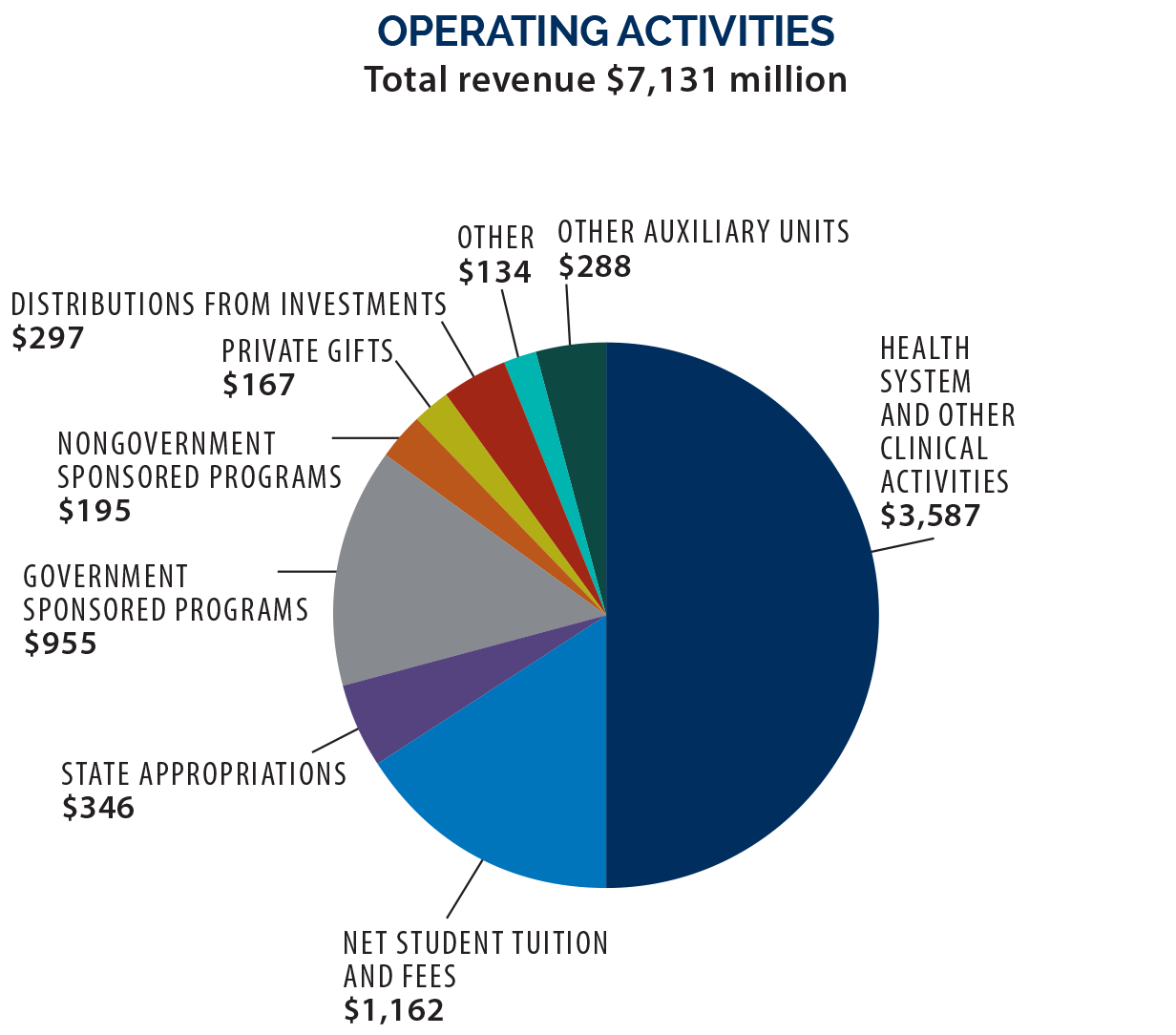 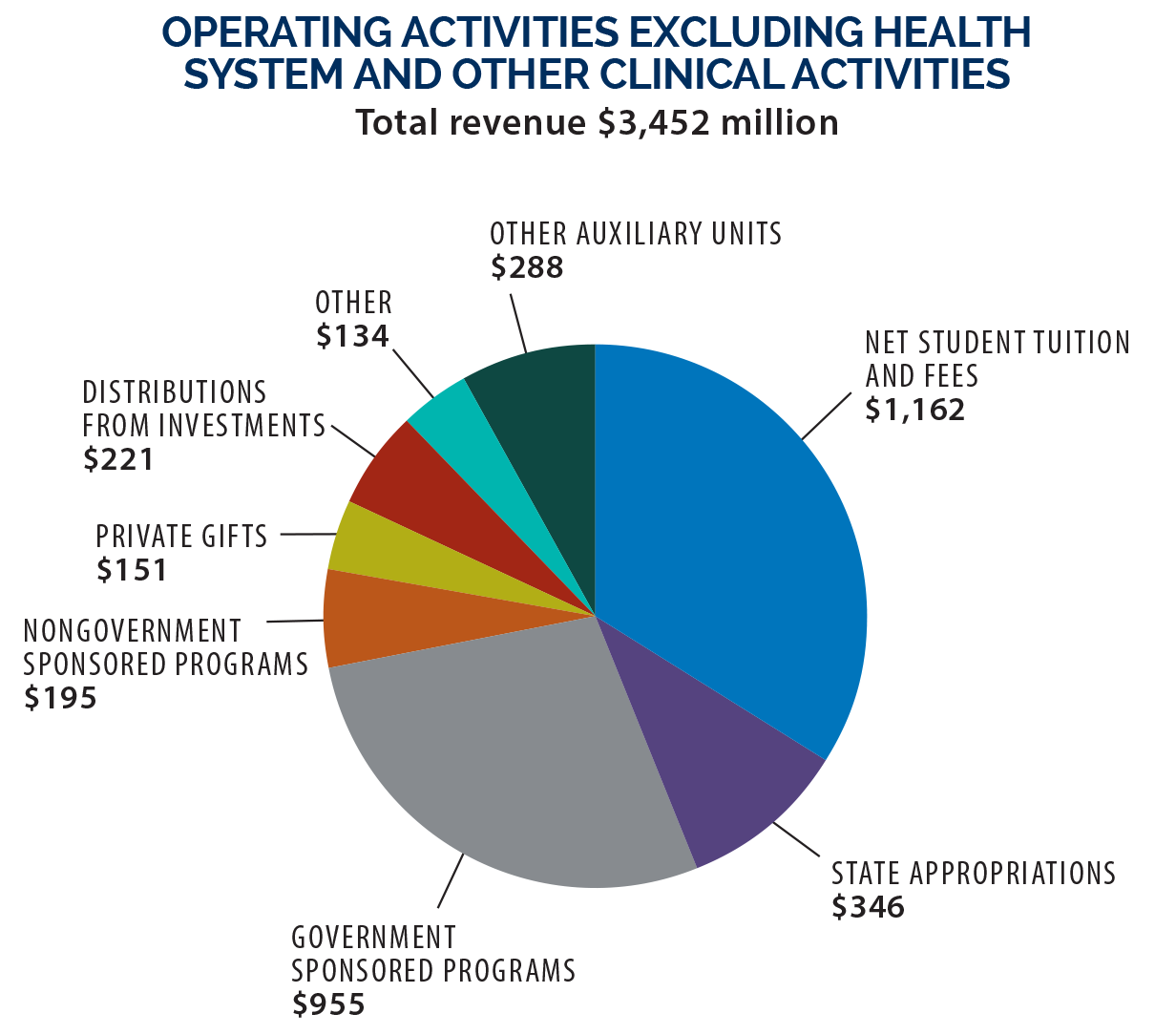 The state of Michigan’s financial support continues to be a component of our strength. In FY 2016, the university received a 1.4 percent increase in state appropriations and will receive an increase of 3.1 percent in FY 2017.

The academic operating budget continues to balance academic excellence and investment in the future with student affordability and economic efficiency. The Ann Arbor campus budget for FY 2017 includes an in-state undergraduate tuition increase of 3.9 percent—below the state legislature’s cap of 4.2 percent. It also includes increases of 3.9 percent for most graduate and professional programs as well as a 4.4 percent increase in nonresident undergraduate tuition. The budget also has a 10.8 percent increase in undergraduate financial aid, for a total of nearly $200 million—the largest pool in U-M’s history. This marks the ninth time in the past 10 years that financial aid has increased by at least 10 percent.

Strong growth in nontuition revenue, along with a commitment to cost containment and improved efficiencies, contributed toward limiting increases in resident student tuition. The demand for a University of Michigan education continues to be at an all-time high. The university again received a record number of undergraduate applications—more than 55,000. This is the ninth consecutive year that applications have increased. Our national and international reputation for excellence continues to attract outstanding students from Michigan and all over the world as well as top faculty, researchers and clinicians. 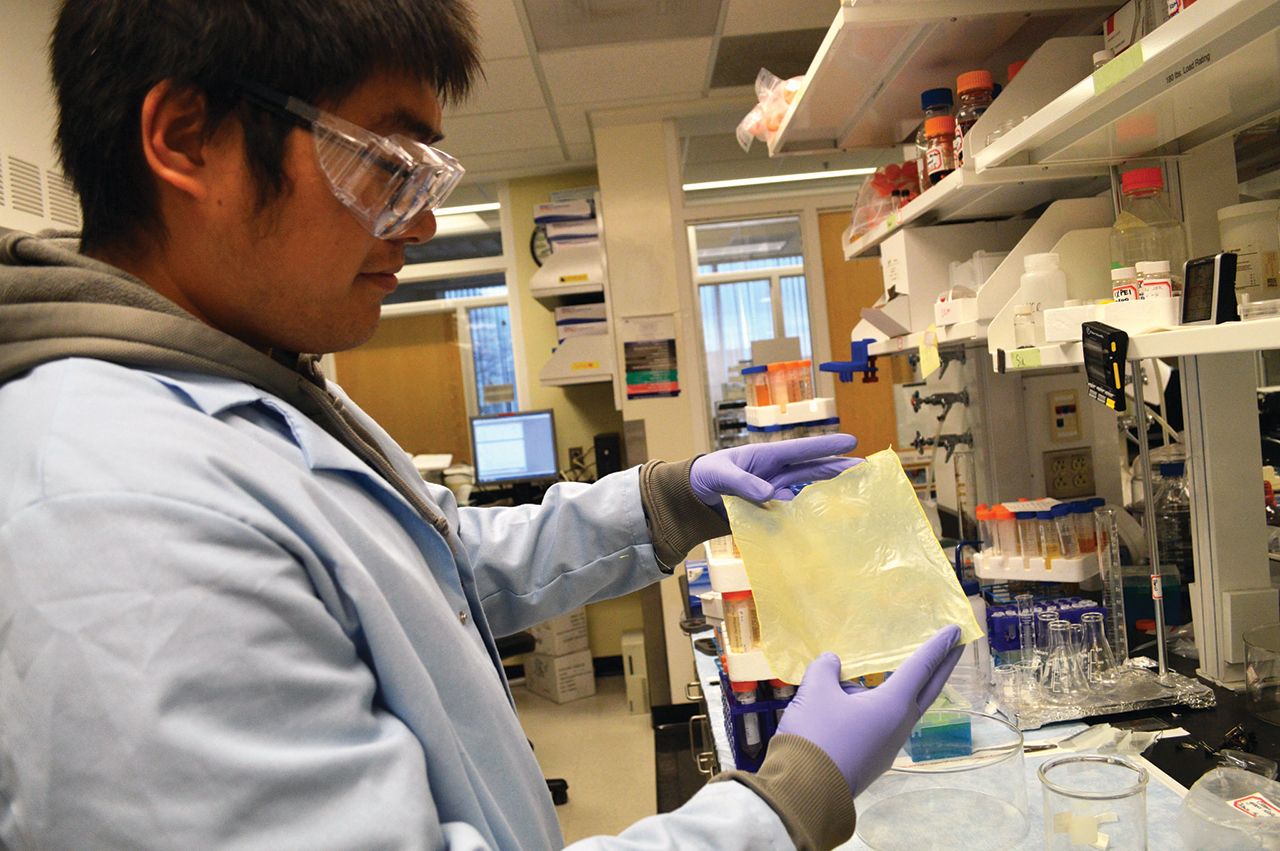 “U-M’s research enterprise remains robust with record total research expenditures of $1.4 billion in FY 2016, up 7.2 percent from the previous year.”

U-M’s research enterprise remains robust with record total research expenditures of $1.4 billion in FY 2016, up 7.2 percent from the previous year. Much of this gain arose from a 7.4 percent increase in funding from the federal government, the principal sponsor of university research. Although the university conducts research for a wide range of federal agencies, this year saw significant gains from the National Institutes of Health, the National Aeronautics and Space Administration and the National Science Foundation. Research sponsorship from industry is of growing importance to our faculty and students. Ongoing efforts to build mutually beneficial corporate partnerships led to an 8.5 percent increase in industry research expenditures, for a total of $85 million.

New external research contracts awarded in FY 2016—a measure of the pipeline of future projects—grew by 1.7 percent, with a growth in total dollar value of 6.3 percent. Looking further ahead, our faculty has submitted proposals for nearly $4.8 billion in future research awards in FY 2016.

U-M is deeply committed to helping the public realize the potential of its research. The Office of Technology Transfer reported 428 new inventions in FY 2016 and a record 173 license/option agreements. It also started 12 new companies based on technology developed at U-M. 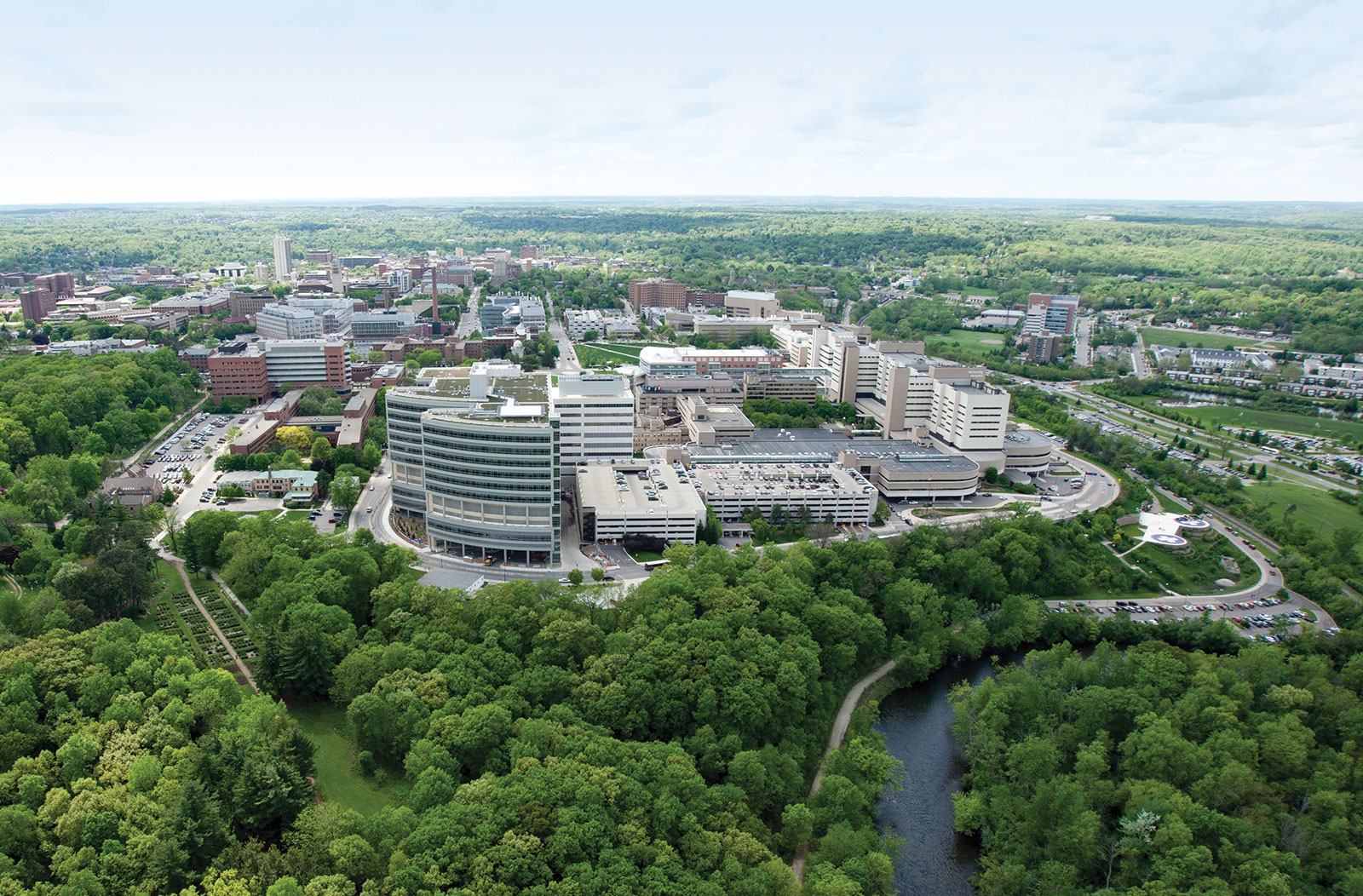 In FY 2016, the U-M hospitals and health centers continued their strong financial performance with an operating margin of 6.3 percent ($190.4 million) on operating revenues of $3.0 billion. These results reflect UMHS’s focus on improving the quality and safety of care as well as the patient experience while reducing costs. In addition, strong patient volume in both clinics and hospitals along with improved patient access contributed to the strong financial performance. Beyond that, high levels of engagement of physician faculty, nurses and support staff across all clinical programs and care locations played key roles in UMHS’s ongoing success.

The health system continues to focus on enhancing the experience for patients and their families. Over the past year, UMHS expanded capacity in its medical short-stay units and emergency critical care center, as well as added a new ambulatory diagnostic treatment unit and specialty imaging capacity. UMHS also embarked on other projects intended to increase patient access, including the planned opening of four new operating rooms in University Hospital, a new health center in west Ann Arbor and another health center in Brighton.

UMHS is also focusing on clinical affiliation arrangements to enhance patient care, clinical research, physician recruitment and support services. To support this objective, the university signed a definitive agreement in September 2016 in connection with a proposed affiliation with Metropolitan Health Corporation, a community health care provider in west Michigan.

UMHS is well positioned to meet its operating and financial goals for 2017, which align with its long-term plan to continuously improve the financial strength of its clinical enterprise and invest in its missions of patient care, education and research.

Controlling costs and reallocating funds to U-M’s core missions remain an essential element in keeping the university financially healthy. Since FY 2004, the institution has reduced or avoided recurring General Fund expenditures totaling $337 million. By remaining relentlessly focused on strategic cost containment, the university has been able to avoid program cuts and keep tuition increases modest throughout one of the most difficult economic periods for the state of Michigan and into a period of recovery.

“U-M is one of only seven public universities in the country to maintain both of these ratings, which are a strong indication of the institution’s robust financial health and bright outlook for the coming years.”

The university needs a wide variety of facilities to encourage collaboration among multiple disciplines and skill sets in order to maintain excellence in education, research and patient care. On that note, FY 2016 marked another noteworthy year of construction and capital renewal of our beautiful campus. You’ll find a summary of capital projects completed, in progress and in planning during FY 2016 in the Major Projects section.

Our long-term debt again earned the highest credit ratings available from Standard & Poor’s (AAA) and Moody’s Investor Services (Aaa). U-M is one of only seven public universities in the country to maintain both of these ratings, which are a strong indication of the institution’s robust financial health and bright outlook for the coming years.

We can all be very proud of the rich history of the University of Michigan and everything that its very bright future represents. I hope you’ll take some time to review Management’s Discussion and Analysis (pdf) in conjunction with the audited financial statements. This informative section details how U-M’s financial strength, prudent financial policies and commitment to maintaining the highest level of excellence help ensure that the university’s mission will continue to be fulfilled well beyond our bicentennial year.